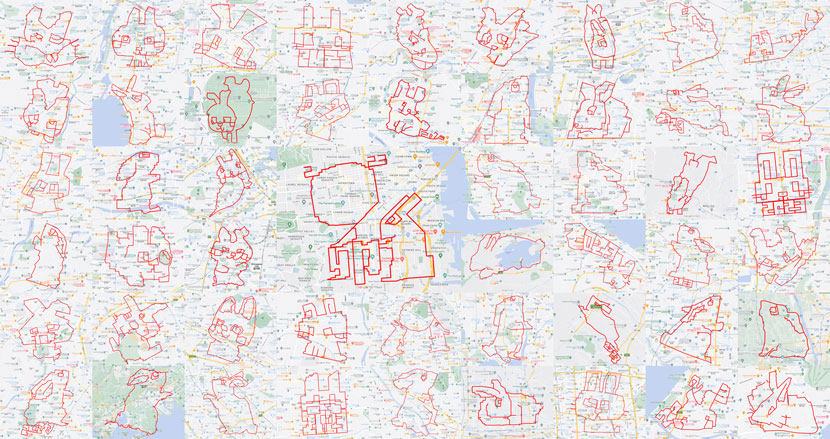 Yassan is now presenting the course and 2023 edition of the Zodiac Run, a GPS run of the Chinese zodiac, at GPSART.info, a GPS art course sharing website.

This course allows visitors to draw GPS art of the Chinese zodiac sign “Rabbit” for the year 2023 at Hatsumode spots around Japan.
Yassan’s course is designed to visit temples and shrines in all 47 prefectures of Japan, especially those with a strong connection to rabbits, as well as famous spots that rank high in the number of worshippers. We have also designed courses in several cities around the world.

Zodiac Run is the activity of drawing GPS art by running a route in the shape of the animals of the Chinese zodiac, a “drawing run” born in the 2010s from the fusion of GPS art and running. As a non-competitive sport, the number of enthusiasts is increasing, especially among citizen runners.
The 2020 Corona Disaster was a turning point, and it has spread as a new motivation to replace marathon running. The “GPS Run” and “GPS Marathon” have been adopted by runner magazines and citizen marathons.

The Zodiac Run is a type of running that draws GPS art of the animals of the Chinese zodiac for the New Year, and is said to have been started by Yukaco in Japan in the mid-2010s. Since then, GPS runners all over the world have simultaneously developed a love for it, and it has now become established as the “Zodiac Run,” a global running culture mainly conducted during the Chinese New Year. The Zodiac Run has become popular among citizen runners as a first run that allows them to avoid the denseness of the city.